We’re all using Docker containers these days to do all sorts of great stuff, but it’s not always obvious how best to automate the building of images and embed good repeatable processes into our projects.

Get started with Docker for Mac

Ensure your versions of docker, docker-compose, and docker-machine are up-to-date and compatible with Docker.app. Your output may differ if you are running different versions.

Note: Early beta releases used docker as the hostname to build the URL. Now, ports are exposed on the private IP addresses of the VM and forwarded to localhost with no other host name set.

Docker is a containerization platform which packages your application and all its dependencies together in the form of containers so as to ensure that your application works seamlessly in any environment be it development or test or production.

Docker containers, wrap a piece of software in a complete filesystem that contains everything needed to run: code, runtime, system tools, system libraries etc. anything that can be installed on a server. This guarantees that the software will always run the same, regardless of its environment.

Docker is a containerization platform which packages your application and all its dependencies together in the form of containers so as to ensure that your application works seamlessly in any environment be it development or test or production.

Docker containers, wrap a piece of software in a complete filesystem that contains everything needed to run: code, runtime, system tools, system libraries etc. anything that can be installed on a server. This guarantees that the software will always run the same, regardless of its environment.

You can refer the diagram shown below, as you can see that containers run on a single machine share the same operating system kernel, they start instantly as only apps need to start as the kernel is already running and uses less RAM.

What are the differences between Docker and Hypervisors?

What is Docker image?

Docker image is the source of Docker container. In other words, Docker images are used to create containers. Images are created with the build command, and they’ll produce a container when started with run. Images are stored in a Docker registry such as registry.hub.docker.com because they can become quite large, images are designed to be composed of layers of other images, allowing a minimal amount of data to be sent when transferring images over the network.

What is Docker container?

What is Docker hub?

Docker hub is a cloud-based registry service which allows you to link to code repositories, build your images and test them, stores manually pushed images, and links to Docker cloud so you can deploy images to your hosts. It provides a centralized resource for container image discovery, distribution and change management, user and team collaboration, and workflow automation throughout the development pipeline.

How is Docker different from other container technologies?

Docker containers are easy to deploy in a cloud. It can get more applications running on the same hardware than other technologies, it makes it easy for developers to quickly create, ready-to-run containerized applications and it makes managing and deploying applications much easier. You can even share containers with your applications.

What is Docker Swarm?

Docker Swarm is native clustering for Docker. It turns a pool of Docker hosts into a single, virtual Docker host. Docker Swarm serves the standard Docker API, any tool that already communicates with a Docker daemon can use Swarm to transparently scale to multiple hosts.

What is Dockerfile used for?

A Dockerfile is a text document that contains all the commands a user could call on the command line to assemble an image. Using docker build users can create an automated build that executes several command-line instructions in succession.

Can I use json instead of yaml for my compose file in Docker?

You can use json instead of yaml for your compose file, to use json file with compose, specify the filename to use for eg:

How to create Docker container?

We can use Docker image to create Docker container by using the below command:

This command will create and start a container.

You should also add, If you want to check the list of all running container with the status on a host use the below command:

How to stop and restart the Docker container?

In order to stop the Docker container you can use the below command:

Now to restart the Docker container you can use:

How far do Docker containers scale?

Large web deployments like Google and Twitter, and platform providers such as Heroku and dotCloud all run on container technology, at a scale of hundreds of thousands or even millions of containers running in parallel.

What platforms does Docker run on?

Docker runs on only Linux and Cloud platforms and then I will mention the below vendors of Linux:

Below are some commonly used Docker commands: 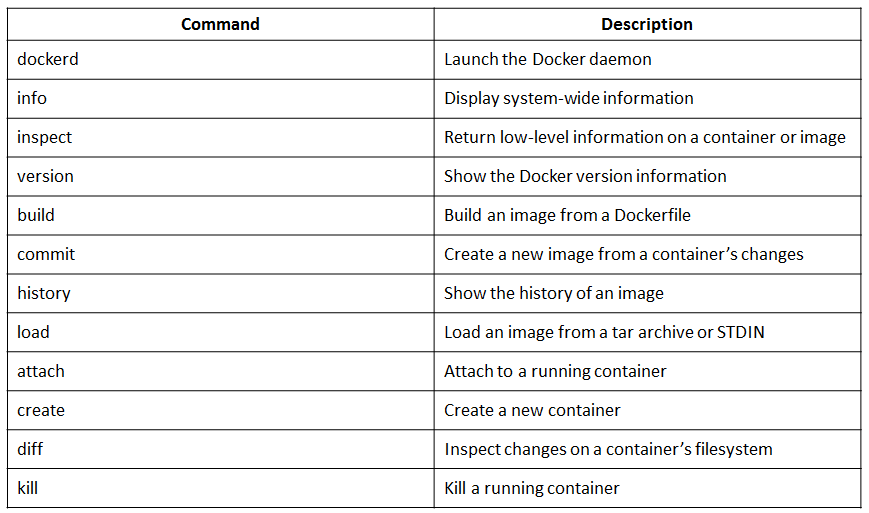 Simply if you want to run two or more container in a same network, you might do it like below:

Use the default bridge network

In this example, you start two different alpine containers on the same Docker host and do some tests to understand how they communicate with each other. You need to have Docker installed and running.

Check that both containers are actually started:

Inspect the bridge network to see what containers are connected to it.

The containers are running in the background. Use the docker attach command to connect to alpine1.

The first interface is the loopback device. Ignore it for now. Notice that the second interface has the IP address 172.17.0.2, which is the same address shown for alpine1 in the previous step.

This succeeds. Next, try pinging the alpine2 container by container name. This will fail.